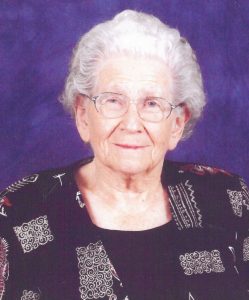 Wilma C. White was born on January 24, 1918 in the Greenpond Community, the daughter of Clarence and Ellen Formby.  She married Eldon Denny White on November 2, 1935 in Como Texas.  He preceded her in death in 2001.  Wilma was a member of Davis Street Baptist Church and a lifelong dairy farmer and housewife.