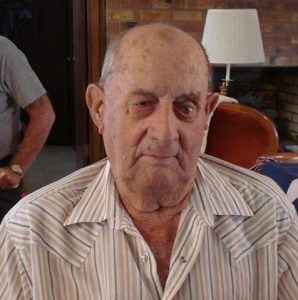 Noble Odessa Coker was born on November 12, 1923 in Arbala, Texas, the son of John Alvin and Addie (Chamness) Coker.  He married Jo An Emery in Altus, OK on December 5, 1943.  Noble served in the U.S. Army in WW II.  He was a 32nd Degree Mason for 50 years and a member of the Yantis Masonic Lodge.  Noble was also a former member of the Yantis Lions Club and a member of the First Baptist Church, Yantis.  He retired from Briggs and Weaver as truck driver.

Noble was preceded in death by his parents; brother, Vernon Coker and sister, Nelda Marie Coker.

Memorials can be made to the Yantis Cemetery Association.