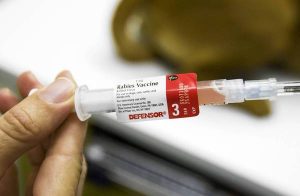 According to KLTV, a dog’s head that was sent off by a Bright Star Veterinary Clinic for rabies testing has been lost in the mail. The dog was brought into the clinic showing symptoms of rabies. During the examination one of the employees was bitten by the dog. The dog was euthanized because of bad health and the remains were sent off for testing. The clinic later contacted the lab in Austin and was told they never received the remains. Since the diagnosis of rabies couldn’t be confirmed exposed clinic employees then had to travel to Dallas for a series of vaccination shots at the expense of the clinic. Texas Department of Health and Human Services confirmed they never received the remains and they still have not been located at this time. You can read the entire KLTV article by clicking here.

Stories Around Texas for November 22nd, 2017