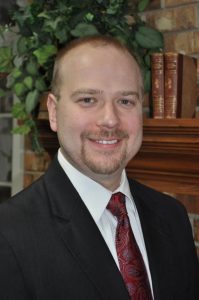 Sulphur Springs resident and attorney of thirteen years Steve Lilley filed paperwork November 11th to run for Judge of the Hopkins County Court at Law on the Republican ticket.  Lilley graduated from Baylor Law School in 2004 and moved to Hopkins County.  Currently serving as an assistant district attorney in Hunt County, he previously worked as a prosecutor and attorney in civil practice in Sulphur Springs.  “I have been honored to spend almost my entire legal career here in northeast Texas.  I believe I have the experience and know I have the desire to serve as the next judge of the Hopkins County Court at Law.  From now until election day, I hope to gain your trust, and your vote.”
Hopkins County Court Judge hopeful, Mr. Lilley and his wife Adrienne have three girls. The older two attend Sulphur Springs Middle School and the youngest is in the third grade.  Ms. Lilley is the children’s director at First United Methodist Church of Sulphur Springs.
If elected, Lilley intends to use his experience, particularly as a prosecutor, to focus on the well-being of children.  “Children must come first in every area of the law.  My first major trial as a prosecutor in Hopkins County was a child abuse case.  These types of cases stay with you and affect you both as an attorney and as a person.  As judge, I will always keep the interests of children first; not only because the law demands it, but because it’s also the right thing to do.”
Throughout his career as a prosecutor, Lilley counts some of his biggest wins as trying and convicting seven accused murderers and one defendant for continuous sexual abuse of a child.  “In the last year alone, our office has had to deal with some very serious cases, including several child deaths.  These are the cases that keep me up at night, striving hard for justice for victims and the community.”
Mr. Lilley wants to follow the example set by retiring Judge Amy Smith, who has presided over the County Court at Law for 20 years.  “Judge Smith has been a great example to me on how a judge should preside over his or her courtroom.  If elected, I will strive to show the same dedication to the job and respect for the attorneys and parties that she has.”
Lilley fills his “off time” attending his daughters’ school and extra-curricular activities and as an adjunct professor at Texas A&M University Commerce teaching law to undergraduates.  “Any parent of growing children knows there is no such thing as free time.  My wife and I enjoy watching our daughters cheerlead, play soccer and softball, dance, and perform in theater and Destination Imagination.”
The Republican Party primary is Tuesday, March 6, 2018 with early voting beginning February 20.  For more information on Mr. Lilley and his candidacy, visit his candidate Facebook page or email him at stevelilleyforjudge@gmail.com.  His forthcoming website will be found at www.stevelilleyforjudge.com.