YOUR TEXAS AGRICULTURE MINUTE: Halloween not as scary as 2017 for Texas agriculture Presented by Texas Farm Bureau-Mike Miesse 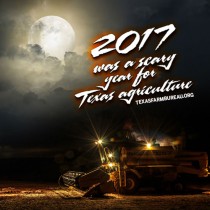 Halloween is a time we celebrate scary things—all for fun. But the entire year of 2017 was frightening for many Texas farmers and ranchers.

Mother Nature was responsible for most of the terror. It began in the spring with destructive tornados that brought brutal damage to the Canton area, claiming five lives.

On the Texas High Plains in March, wildfires consumed half a million acres and took the lives of five more Texans, including three young ranchers trying to save their cattle from the inferno. Hundreds of lost cattle and millions in damage added to the dread.

On Aug. 25, Hurricane Harvey paid a call on the Texas Gulf Coast. Seventy-seven people died and the Gulf Coast cotton industry was devastated. There was more than $200 million dollars in damage to agriculture, including rice, soybeans, livestock, cotton and infrastructure.

When it comes to scary, rampaging Texas weather and wind-driven fire is hard to beat. Planning for such things is almost impossible.

Scariest of all? It will happen again.

Hearts of Life Animal Rescue Animal of the Week- Meet Tinkerbell, AKA: Tink!