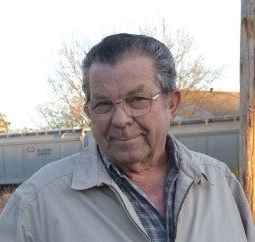 James Derle Buchanan was undoubtedly the most loved man in Cumby, Texas. His heart was so full of love for his family, God, and anyone that he ever met. He loved to tell stories about his life and lessons he learned along the way to anyone that would listen.

Known to many as JD, James passed away at the tender age of 75 in Greenville on September 23, 2017. He was surrounded by family and friends as he was released from his pain.

He is survived by his wife of 53 years, Linda (Powell); his children Donna Eoff of Mesquite, Brenna Hazelip and husband, Phil of Cumby, and David Buchanan and wife, Torrie of Benton, AR; six grandchildren, Catrina Mullins, Cattie Powers, Bree Mefford, Ryan Mefford, Westyn Buchanan, and Karsyn Buchanan; seven great-grandchildren, one great-great grandchild, sister Kathy Yarbro and numerous nieces and nephews. He is preceded in death by his parents and two brothers, Curtis Buchanan and Jimmy Buchanan.

James was born in Cooper, Texas on November 6, 1941 to J.C. and Audry (James) Buchanan. He joined to the United States Army in 1960 and served until 1963. In 1964, he married the love of his life, Linda, in Cumby. He was an Inspector Supervisor at Vought Aircraft until he retired in 2003. He loved to piddle around working on cars and tractors, fishing with his “little buddies”, and giving Linda a hard time. He was a member of Cornerstone Baptist Church.

Visitation was held on Monday, September 25, 2017 from 6:00pm to 8:00pm at Murray-Orwosky Funeral Home in Sulphur Springs. His funeral will take place at Cornerstone Baptist Church in Cumby at 11:00am, followed by graveside services at Cumby Cemetery.

He will be carried to his final resting place by Ryan Mefford, Westyn Buchanan, Karsyn Buchanan, Adam Yarbro, John Bendall, and Ronnie Moreland. His honorary pallbearers are his “little buddies” KoltynHazelip, Bradin Pritchett, and J.W. Yarbro; along with David Buchanan and Phil Hazelip.