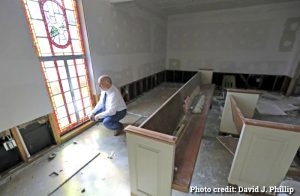 Three Texas churches filed a federal lawsuit in the Southern District of Texas against the Federal Emergency Management Agency (FEMA) earlier this month. According to the complaint, the case is a challenge to the FEMA policy, “that categorically excludes houses of worship from equal access to disaster relief grants because of their religious status.”

Under the Disaster Relief and Emergency Assistance Actthe President “may make contributions” to a private nonprofit facility damaged or destroyed by a major disaster. FEMA can administer funds through its Public Assistance (PA) Program afterthe President declares that a major disaster exists in a State. The PA Program administers funds to eligible non-profits for “repair, restoration, reconstruction, or replacement of the facility and for associated expenses.”Facilities established or primarily used for political, athletic, religious, recreational, vocational, or academic training, conferences, or similar activities are not eligible to receive funds under the PA program. A church may not apply for contributions under the PA Program because churches are established and primarily used for religious purposes. Non-profits only have 30 days from the date of the disaster to apply. As a result, the churches filing the lawsuit acted quickly.

Why the churches think they can win:

In the first paragraph of the complaint, the churches assert that FEMA’s policy of making religious non-profits ineligible to receive benefits violates the Free Exercise Clause of the First Amendment under the Trinity Lutheran case. In that case, decided just three months ago, the Supreme Court held that Trinity Lutheran could not be excluded from receiving a public grant for playground resurfacing on the basis that it was a place of religious teaching and worship. For more information on Trinity Lutheran see our analysis of the case here. The churches argue that just as the State of Missouri couldn’t deny Trinity Lutheran Church funds because it was a religious organization, FEMA can’t deny a church funds because it is a religious organization.

Additionally, the churches have the support of President Trump and under the Disaster Relief and Emergency Act it is the President that may make contributions following disasters. President Trump tweeted: “Churches in Texas should be entitled to reimbursement from FEMA relief funds for helping victims of hurricane Harvey (just like others).”The churches also point out the hypocrisy of FEMA for utilizing hundreds of churches as shelters, medical centers, and distribution centers for relief following the Hurricane and at the same time denying churches the funds necessary to rebuild the facilities. The churches are confident that FEMA can and should change its policy of excluding churches from the PA Program.

What happens if the churches win:

The churches argue that to make them ineligible from funds because they are religious denies them the free exercise of religion. But there is a second clause to the First Amendment to consider. The Establishment Clause prohibits the government from respecting religion over unbelief and from favoring one religion over another. The source of FEMA’s funding is taxation. Using the PA program to help rebuild religious buildings necessarily compels citizens to support those religious groups. Consider the following conflicts some Christians are engaged in across the United States:

In each of these circumstances, Christians argue the danger of compulsive or voluntary action and financial support that violates their religious beliefs. If FEMA provides public funding for religious organizations then it must provide the funds to all religious groups equally.FEMA wouldn’t just provide funds to fix the facilities of Christian churches, but it would also fund repairs to Muslim mosques, Buddhist temples, and Hindi shrines. This necessarily means that Christians will be compelled, through taxation, to support the “repair, restoration, reconstruction, or replacement” of false gods and idols and the facilities where they are worshipped.

In Justice Neil Gorsuch’s Trinity Lutheran opinion, he states, “the court leaves open the possibility a useful distinction might be drawn between laws that discriminate on the basis of religious status and religious use.” In other words, there might be a line (admittedly a fine line) between denying a public benefit to a church because it is a religious organization and denying the benefit to the church because the benefit would be used for a religious purpose.

But distinguishing between religious and nonreligious purpose is more challenging than it sounds. After Hurricane Katrina hit Louisiana in 2005, FEMA (then under the direction of President George W. Bush) reimbursed churches for shelter, food, and supplies the churches provided to the general public. When churches feed and shelter evacuees are they taking these actions to provide what the government calls a “critical public service” or are they acting for religious purposes? Or a mix of both? Doesn’t every action a church takes serve a religious purpose, even if the action benefits all members of the public equally? Is there a difference between reimbursing a church for expenses when it helps people affected by a disaster and providing funds for the church building to be repaired after the disaster?