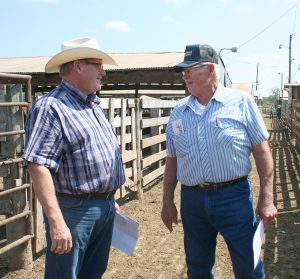 Producers consigned 6,955 head of calves and yearlings to the NETBIO sale that drew a big crowd of sellers, buyers and visitors. That number exceeded the previous September sale record by more than 1,000 head.

“Producers continue to do a great job of pre-conditioning and getting their cattle ready for this sale,” Fowler said. “The prices reflected the good quality of cattle that were offered for sale.”

A total of 44 buyers purchased all the cattle at an average of $907.89 per head. The demand was very good for all weights of cattle, while replacement heifers were in good demand and moved at a good price.

Fowler said feedlots buyers were well represented, with cattle going to feed yards in Texas, Oklahoma, Kansas, Nebraska and Colorado. Some cattle were purchased to get them ready to go on winter wheat later in the season.

Once again the numbers of shippers (sellers) exceeded previous records with 303 producers consigning cattle to the sale. At the same time, membership to the NETBIO pre-conditioning and marketing program continued to grow.

The NETBIO Pre-Conditioned Stocker and Feeder Calf Sale gives producers a market to offer their pre-conditioned calves and yearlings in load lot quantities. NETBIO holds six pre-conditioned calf sales per year, which is the marketing arm for members of the organization.

However, this year there will be seven NETBIO sales. The organization has added a second November sale due to high demand.

The next sale will be held at the Sulphur Springs Livestock Commission on Wednesday, November 15, which is the anniversary sale. The books have  been closed for some time on this sale.