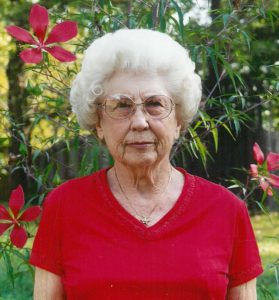 Funeral service for Kathleen Bandy,age 95, of Sulphur Springs will be held at 10:00 A.M. on Monday, August 28, 2017 at Murray-Orwosky Funeral Chapel with Rev. Fred Lewis officiating.  Interment will follow at Restlawn Cemetery, Sulphur Springs, Texas.   Visitation will be held from 6 to 8 P.M on Sunday, August 27, 2017 at Murray-Orwosky Funeral Home. Ms. Bandy, passed away Thursday, August 24, 2017, at Rock Creek Health and Rehab.

Kathleen Elizabeth Taylor was born on April 17, 1922 in Dike, Texas, the daughter of B.R. and Millie (Wells) Taylor.  She married Paul Britton, whom preceded in death and A.C. Bandy whom also preceded her in death. Kathleen was a member of First Baptist Church, Sulphur Springs and a retired LVN

She is survived by her son, Robert Blackburn and wife, Sharon of Sunnyvale, Texas; grandchildren, Christi Backburn McKay of Seattle and Jaret Blackburn of Garland; niece, Kathy Taylor and nephew, Mark Taylor.

Kathleen was preceded in death by her parents, both husbands and brother, Jack Taylor.