A Country Without a King by John Litzler 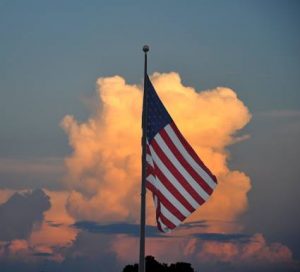 Today marks the 241st celebration of American independence. For many, today is a time to reflect on all of the blessings God has bestowed on our nation and to honor the fight to protect freedom for our citizens. America is a republic. In a republican form of government, the power resides in elected officials who represent the citizens that elected them. Or, as Abraham Lincoln put it, a republic is a government of the people, by the people, and for the people. This type of government is dramatically different from oligarchies and monarchies, and there was a point early in our nation’s history, where it looked like a republican form of government was not going to work out.

In 1782, it was clear that America was on the verge of winning the revolutionary war, but Congress didn’t have any money.  If you have complaints about Congress today, you weren’t the first. Many soldiers, realizing Congress wouldn’t be able to keep its promise to pay them for their service, were not pleased with this new government. This displeasure was deepened because many soldiers also thought Congress had been ineffective during the revolutionary war. Many Americans today say that our government doesn’t do enough to take care of our veterans. This argument is as old as the country itself.

Historians debate about how widespread this discontent was, but it was enough of a thought that Colonel Lewis Nicola wrote a letter to George Washington. In the letter, Nicola, basically said that people had confused tyranny and monarchy and that it was possible to have a good monarch. Nicola suggested a title for the leader of this new country… “King”! It’s almost mind-boggling. Here is a group of people who bravely fought for freedom and just a short time later, a sect of them are willing crown a king. The letter flummoxed Washington as well. He wrote back to Nicola and told him that any plan for America to have a king would be the end of this new country. Remember, the Articles of the Confederation were barely a year old and the U.S. Constitution wouldn’t come for another seven years. America was in its infancy and its new form of government was unproven and fragile. It was easy for the American people to lose faith and revert to what they had always known, a monarchy.

The story of early America is similar to the story of the Israelites in several ways. In 1 Samuel 8, the elders approached Samuel and asked him to appoint a king for them. They saw that Samuel’s sons perverted justice and said to themselves, “Look, this system with judges isn’t going to work anymore. We need a king to judge us just likeall of the other nations.” It’s the same thing the Americans said when they lost faith in their new government. This isn’t going to work; can we be governed by a monarch please.

A nation ruled by a king isn’t an inherently bad thing. There are wise and fair kings just as there are wicked kings. But Israel wanted an earthly king because they rejected the better system, where God was king of their lives. Early Americans wanted a king for their new country because they didn’t have faith in a better system of a government of the people, by the people, and for the people. Please be sure to vote, serve on jury with you peers when called upon, and practice all of the other valuable civic responsibilities and freedoms that make this country great. But also, thank God for His Lordship over your life. This Independence Day, let us thank our Lord for a country without a king and a life with the King.