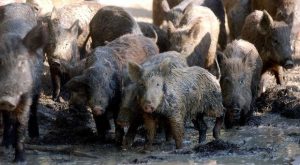 On June 12th, Governor Gregg Abbott signed into law a provision authorizing the shooting of feral hogs or coyotes from a hot air balloon. The new section will be added to Chapter 43 of the Parks and Wildlife Code and will take effect September 1, 2017. The Parks and Wildlife Code will also authorize Texas to regulate the Hog-Air Balloon industry by requiring permits and other safeguards. In a political climate where parties seem incapable of agreeing on much of anything, the new law was almost entirely uncontroversial. Despite a significant amount of pork in the bill, it passed both the House of Representatives and Senate without a single opposing vote.

Feral hogs have been an incessant problem for Texas because hogs destroy other wildlife, land, habitats, and perhaps most importantly, approximately $50 million in crops each year. Estimates of the feral hog population range from 1.5 million (according to the Texas Parks and Wildlife website) to 2 million.

Texas has already authorized year-round hunting of feral hogs, avoided limits on the number of hogs that can be killed, and, in 2011, even authorized the hunting of hogs from helicopters. Yet despite the removal of many of the traditional restrictions on hunting, Texas’ feral hog population has increased 7% from last year, according to the National Agricultural Statistic Service. The inability to control the feral hog population is contributed to the ability of hogs to breed quickly and in sizable number, and, perhaps of even greater significance, because of the lack of the hogs’ natural predators.

Since it became legal in 2011, helicopter hog hunts have really been bringing home the bacon. A luxury helicopter hog hunt can cost over $35,000. According to the website of Helibacon, based in Bryan, Texas, the company even allows hunters to ham it up with aerial machine guns. Why hasn’t the pork-chopper business resulted in a reduction of the feral hog population in Texas? In part, because of the high price tag. The average hunter can’t afford to gun down hogs with an M16 from a helicopter. Additionally, helicopters can make too much noise, causing the hogs to bolt before hunters can get into position to take a clean shot. A hovering helicopter also doesn’t provide a very stable shooting platform.

The text of the new law can be a bit of a boar and I don’t want to get bogged down with how the sausage is made, so here’s the summary: A landowner or someone with proper permission from the landowner may obtain a permit from the Texas Parks and Wildlife Commission that will allow him or her to participate as a hunter or observer in the killing of feral hogs (or coyotes) from a hot air balloon. Texas lawmakers believe that the law will provide a successful alternative to helicopter hunting because hot air balloons are much quieter and provide a more a stable platform for shooting.  So, get ready huntsmen and women, because beginning this fall you’ll be in hog heaven.