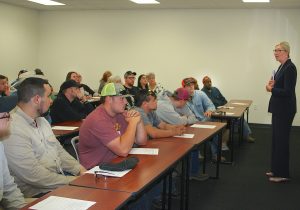 Paris Junior College officials conducted a public meeting on the PJC-Sulphur Springs Center campus Monday to discuss and receive input on the concealed carrying of handguns on campus.

The general provisions of the state law, passed by the 2015 Texas Legislature, requires all community colleges to develop a policy allowing for “reasonable restrictions” on locations where guns may be carried on college campuses.

PJC President Dr. Pamela Anglin said it is important that the college inform the students of all the provisions of the law, which will allow individuals holding a valid Texas Concealed Handgun License (CHL) or the new state designated License to Carry (LTC) certificate, to carry their handgun, concealed on their person, on the campus of Paris Junior College beginning August 1 of this year.

“This meeting that we are conducting on each of the three campuses is to seek the input of the students, faculty and staff as we develop and establish our policy on the issue,” Dr. Anglin said. “We want our campuses to be a safe place for our students while they pursue their education.”

The large crowd of students, faculty and staff attending the meeting asked questions and provided comments and concerns on such things as carrying a concealed weapon in classrooms and in the office spaces on campus.

Dr. Anglin told the audience that there are specific exclusions to the concealed carry of handguns on campus. Under the Texas statutes outside of Texas Government Code Section 411.2031, concealed carry is prohibited from the following premises or locations:

Dr. Anglin said that comments regarding the concealed carry of handguns on campus can be made by sending an email to campuscarry@parisjc.edu. With the comments obtained from the meetings and from emails, the Campus Carry Committee will draft policies that will be posted on the college website at www.parisjc.edu.