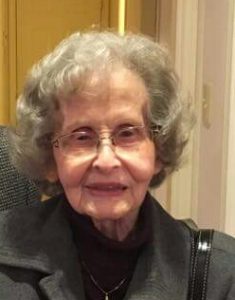 Funeral services for Jimmie Sue Chapman Jackson, age 87, of Dallas will be conducted at 11:00 a.m., Thursday, April 6, 2017 at West Oaks Funeral Home Chapel with Rev. Harold Elias-Perciful. Visitation will be from 10:00 to 11:00 a.m., prior to the service.  Sue passed away Saturday, April 1, 2017 at the Presbyterian Hospital of Dallas. Sue was born on December 4, 1929 in the community of Emblem, the daughter of Corbitt Clifton Chapman and Flossie Ross Chapman.  She married Roy Evans Jackson on January 22, 1949 in Commerce, TX.  He preceded her in death.  Sue was a homemaker and a member of the Carrollton First Christian Church.  She is survived by her daughter, Pamela Rowland of Arlington, TN, son, Leslie Jackson of Dallas, sisters, Shirley Lawson of Sulphur Springs, Elba Dodd of Dallas, grandchildren, Jessica Jackson of Stuarts Draft, VA, Jana Rowland of Atoka, TN, Benjamin Jackson of Fincastle, VA, Matthew Jackson of the United States Air Force, great-grandchildren, Austin Slaughter, Noah Westenberger and Kinsey Causie.  In addition to her husband she was preceded in death by her parents and her brother, Charlie Chapman. Memorials may be made to the Carrollton First Christian Church, 1835 Walnut Ave, Carrollton, TX  75006 or to Seasons Hospice & Palliative Care at www.seasons.org.  Arrangements are under the direction of West Oak Funeral Home. www.westoaksfuneralhome.com