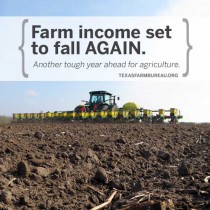 It’s been a tough three years for agriculture, and 2017 isn’t looking much better. Farm income is likely to drop nearly 9 percent this year, marking the fourth consecutive year of declines.

How bad is bad?

Farm debt is forecast to increase by about 5 percent.

And with many crop prices low, farmers are looking to tighten their wallet. But there’s not much left to pinch. The downturn is pushing many American farmers out of business.

Some say the next few years could bring the biggest wave of farm closures we’ve seen in decades.

But we’ve been here before. Farmers have learned from their experiences. Even so, many difficult decisions lie ahead.

Our Texas farm families are facing a long, hard year.

Eight Tips for a Healthy Heart by Johanna Hicks