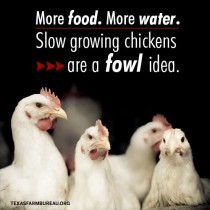 You can buy cage-free eggs, if you want them, and don’t mind paying roughly three times the price. There is another poultry idea out there that might be even more costly–to the environment. It’s called slow chicken, and it’s not about chickens that are easier to catch. It’s about raising meat chickens more slowly.

It’s another classic example of the unintended consequences of good intentions. Let’s add up the tab for slow chicken. It will cost more all right, but it only starts there.

According to the National Chicken Council, if only one-third of broiler chicken producers switched to a typical slower-growing breed, nearly 1.5 billion more birds would be needed annually. That means more feed and more fuel to grow and transport. It would take more than seven million more acres in production to grow the feed. It would also take more water–like five billion gallons more.

And chickens doing what chickens do would mean an additional 28 billion pounds of manure annually. Whoa! We may be going too fast on “slow chicken.”

Media outlets: This content may be used without further permission.