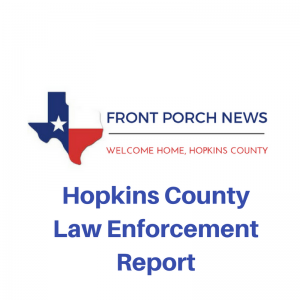 A 28 year old Dallas woman was arrested for Possession of a Controlled Substance, Public Intoxication, and Tampering or Fabricating Physical Evidence with intent to impair. The woman is reported to have been walking southbound on Hwy 154 near CR 2300. After observing behavior consistent with drug abuse, the arresting officer believed she was under the influence of narcotics and transported her to the jail. During the dress out procedure it was determined she had concealed a black bag containing two separate baggies and 3 hypodermic needles. The substance inside the bags tested positive for methamphetamine.

A 51 year old Saltillo woman was arrested for possession of marijuana less than 2 ounces.

A 27 year old Yantis man was charged with Interfering with an Emergency Call and Injury to Elderly. He was arrested after getting into an altercation with an 83 year old man at Joe Bob’s Convenience Store in Como. During the altercation the man took away the elderly victims phone while he was on the phone with HSCO dispatch. He then threw the victim’s phone at him striking the victim in the nose causing a laceration that bled significantly. Victim also suffered a skin tear/laceration to his left hand when the phone was taken from him.

Cumby ISD Will Be Closed Tomorrow Due to Illnesses